Female Toothed seadevil (Neoceratias spinifer) with male attached. Sexual Parasitism in Ceratioid Anglerfishes.In some ceratioid taxa, the male's attachment to the female is followed by fusion of epidermal and dermal tissues and, eventually, by a connection of the circulatory systems so that the male becomes permanently dependent on the female for blood-transported nutrients, while the host female becomes a kind of self-fertilizing hermaphrodite. Neoceratiidae (subclass Actinopterygii, order Lophiiformes) A monospecific family (Neoceratias spinifer) of small (6 cm long), deep-sea fish that have a large head, a large mouth, and small eyes. The jaws are equipped with many long and slender teeth. The single dorsal, caudal, and anal fins have a rounded profile, while the pectorals are small. No illicium is present. Females are larger than males; males may form a parasitic relationship with their female sex partners. They are found in all oceans.. Permanent attachment is usually accomplished by means of separate outgrowths from the snout and tip of the lower jaw of the male, both of which eventually fuse with the skin of the female. In some species a papilla of female tissue protrudes into the mouth of the male, sometimes appearing to completely occlude the pharynx. The heads of some males become broadly fused to the skin of the female, extending from the tip of the lower jaw to the rear of the skull, appearing as if embedded or absorbed by their mate, while in others, the male is carried at the tip of an elongate, cylindrical stalk of female tissue. ..Increasing considerably in size once fused, their volume becoming much greater than free-living males of the same species, and being otherwise completely unable to acquire nutrients on their own, the males are considered to be parasites. Female Toothed seadevil [size of single organism: 8 cm] | Deep Sea fish | Tiefsee Fisch | Bezahnte Seeteufel (Neoceratias spinifer) mit angeheftetem Männchen 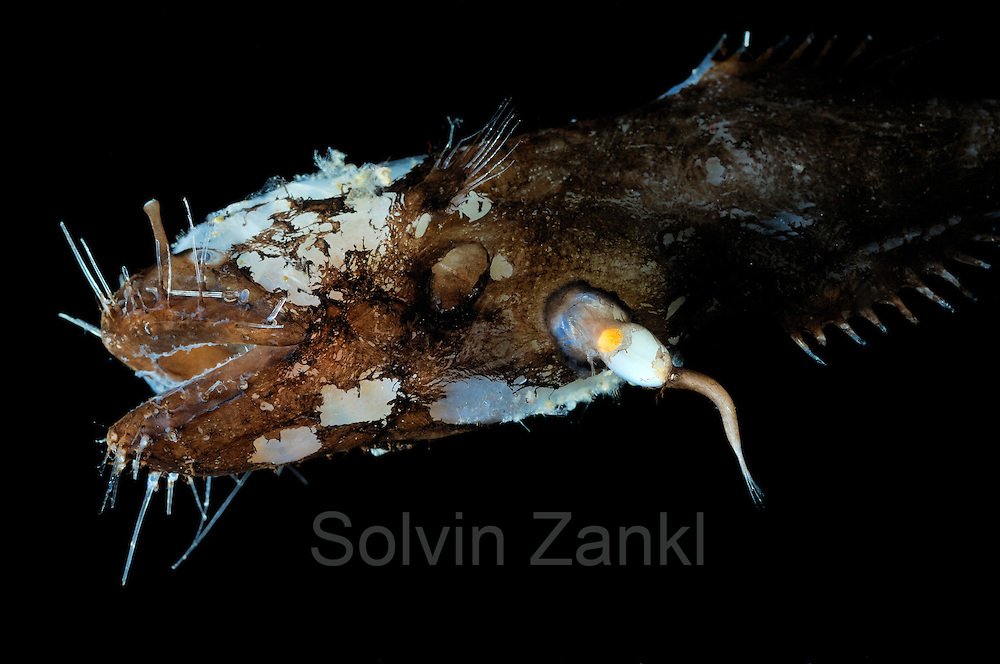